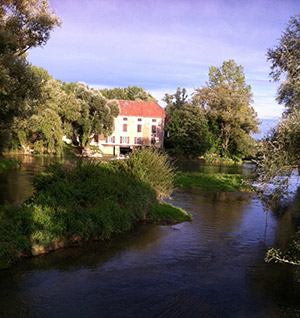 Located between the Jura mountains in the east, and the hills of the Chalonnais in the west, the Bresse landscape reveals all its charm to its visitors. It is an area covered in flower dotted meadows and fields of maize, where you will find shaded rivers leading to secluded lakes, passing on the way the old mills and half-timbered farmhouses.

“La Maison Bressane” is characterised by its harmony and discreet appearance placed in the heart of nature and often hidden from eyes - ideal as a principal or secondary house, being only 1½ hours to Geneva and Lyon.

While visiting the villages you can sample local specialities and explore their history while enjoying the warmth that is characteristic of the inhabitants of Bresse. It is a region of gastronomic excellence known especially for its ‘Poulet de Bresse’, a chicken with blue feet, white plume and a red crest.

The rural villages are a particular element of the Bressan landscape. More than often, the accommodation for humans and animals is found under the same roof, determined by the area that can be exploited. Walls of brick and broad wood panels with overhanging roofs make these Bressan houses blend in with the land and the trees. 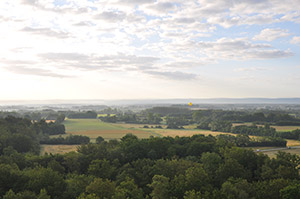 Close to each house you will often find a well, in which the stone that lies beneath the two pillars is curved, as well as a traditional bread oven known as a ‘four à pain’. Other buildings may be found arranged either as an annex at the end of the principal
building or isolated in a courtyard.

The area also has many large farms whose pastures are scattered with ponds and different herds.

The word “Bresse” means soft, wet ground. It is a land of diverse soil, as shown in its rural architecture where you will find nature reserves full with waterfowl, a paradise
of mushrooms in the undergrowth and ponds which shimmer in the moonlight.

This secret and captivating land is a treat for fishermen and walkers.

Bresse was once a region that was completely self-sufficient. Men took all the necessary materials for the construction of their habitat from the earth, which also provided them with food.

Come to Bresse, an area at ease with nature that follows the cycle of the sun. Wander through the countryside, never being far from the towns, fulfilling a life full of change and enjoyment. Here, one can feel at ease...

To discover calm, conviviality, peacefulness... become the owner of a renovated Bressan farmhouse, or renovate it yourself with style.